Why the Bristol BME Powerlist matters 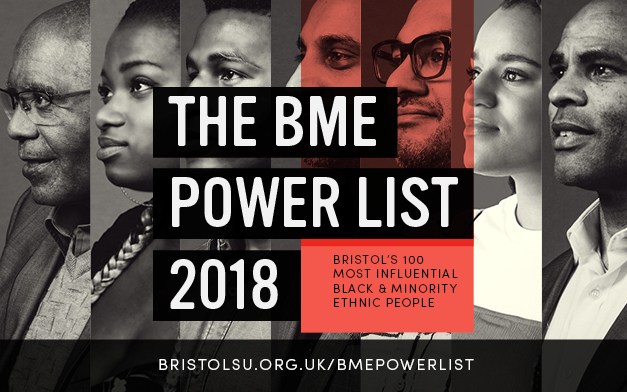 Published on Monday, October 1 to mark the beginning of Black History Month, the project aims to celebrate excellence across a broad spectrum of fields – from activism to arts, politics to business – and provide role models for the next generation.

The Bristol BME Powerlist has been 18 months in the making and is a joint partnership between the University of Bristol, Bristol Students’ Union and Bristol24/7 to showcase and celebrate diversity across the city; with a panel of ten judges whittling down 500 nominations to 100.

The project’s founder, Chanté Joseph, said: “The social discourse around inclusion and diversity is changing, it has gone beyond tokenism and moved into a space of structural reform and meaningful actions. This list is the latter, we will be recognising community leaders and influencers that have gone above and beyond to shape and serve the communities around them.

“This BME Powerlist is a way of creating hypervisibility for some of Bristol’s unsung BME heroes and giving them access to the university. I hope this list will be the start of a greater, mutually beneficial relationship between students and the community and will provide students with a wider support network of inspiring individuals and opportunities.”

I was really proud to be listed under “Activism and Campaigning” along with amazing people like Dr Paul Stephenson, the civil rights activist who helped to highlight the racism that black people faced every day in the UK and led the victorious Bristol bus boycott in 1963. His fight against racism has inspired so many other people in Bristol and around the world.

For me, it was important to be listed with adults, like any other activist rather than as a student, a young person. These are the people who were listed who have inspired me and/or supported me.

Marvin Rees: The first directly elected mayor of African-Caribbean descent in Europe, Marvin has pledged to tackle inequality and make Bristol a fairer city for all. He founded the Bristol Leadership Programme, which helps people from disadvantaged backgrounds to realise their ambitions. Marvin allowed me to shadow him and Asher Craig, teaching me a lot about local government. He also spoke at a Black2Nature workshop about how going on a camp was life-changing for him and how he would like to see every child and teenager in Bristol attend one.

Cleo Lake: Appointed lord mayor of Bristol in 2018, Cleo is a Green councillor for Cotham, campaigner and community activist. She also organised the first BME Green Party gathering where my mum spoke on my behalf about Climate breakdown and its impact on Bangladesh. It is incredibly inspiring for me to see a BME woman so passionate about the environment.

Mohammed Sadiq: Managing director of GENeco, the company known for the world’s first poo-powered bus, Mohammed was also appointed chair of Bristol Green Capital Partnership in 2016. He advocates for diversity in the environmental sector. Mohammed Sadiq has been really supportive of my ambition for BME engagement with nature and is an example of the impact one BME person can make, through his work experience scheme for Year 10 BE boys to gain proper work experience.

David Olusoga: A historian and broadcaster, as well as presenter of the BBC Two documentary, Britain’s Forgotten Slave Owners. David also informs people about the history of black people in Britain and writes for the Guardian.
Michael Yong: Bristol Post reporter Michael covers some of the most important social issues in the city, particularly homelessness, the housing crisis and education.

Nikesh Shukla: The writer and author are working to change the face of publishing; breaking down barriers for BME writers and creatives. Until recently, Nikesh was also the editor of Rife Magazine, giving a platform to young people in Bristol.

Emmanuel Adukwu: A senior lecturer in biomedical science at UWE, Emmanuel is also co-founder of the Aspiring Professional Hub, creating the platform to help BME students with their careers. He was also the creator and director of UWE Bristol Africa Week.