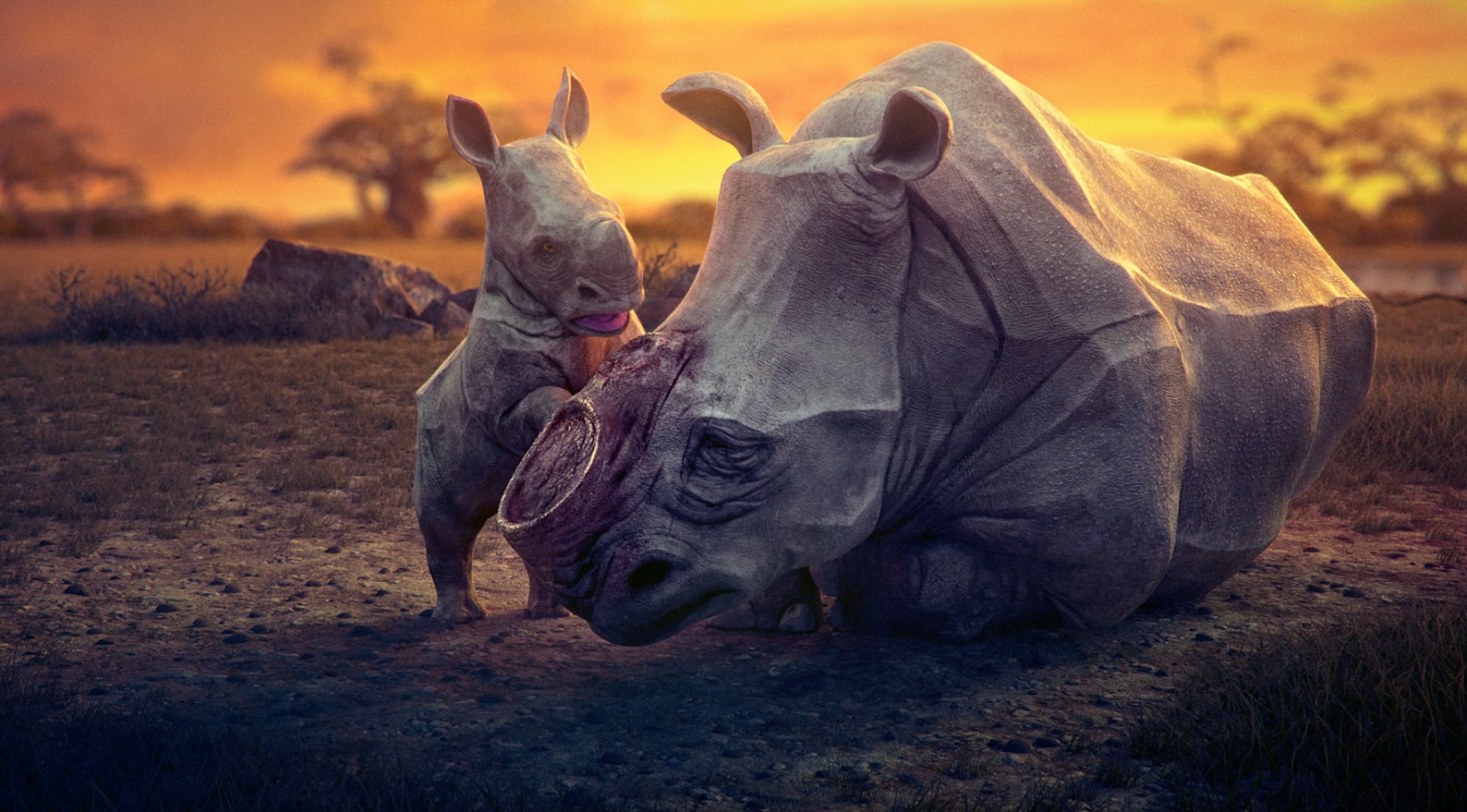 This is an animated film made by Zombie Studio for the 2016 Wildlife Conservation Film Festival.

Where has it been for the last 3 years? 320K likes of Vimeo, that’s where.

Although this film is gooey, with “cute” animals taking on a human voice, it is what’s needed to get people connected with wildlife and what we are doing to it.

Please share this video and let’s make it 320 million views. 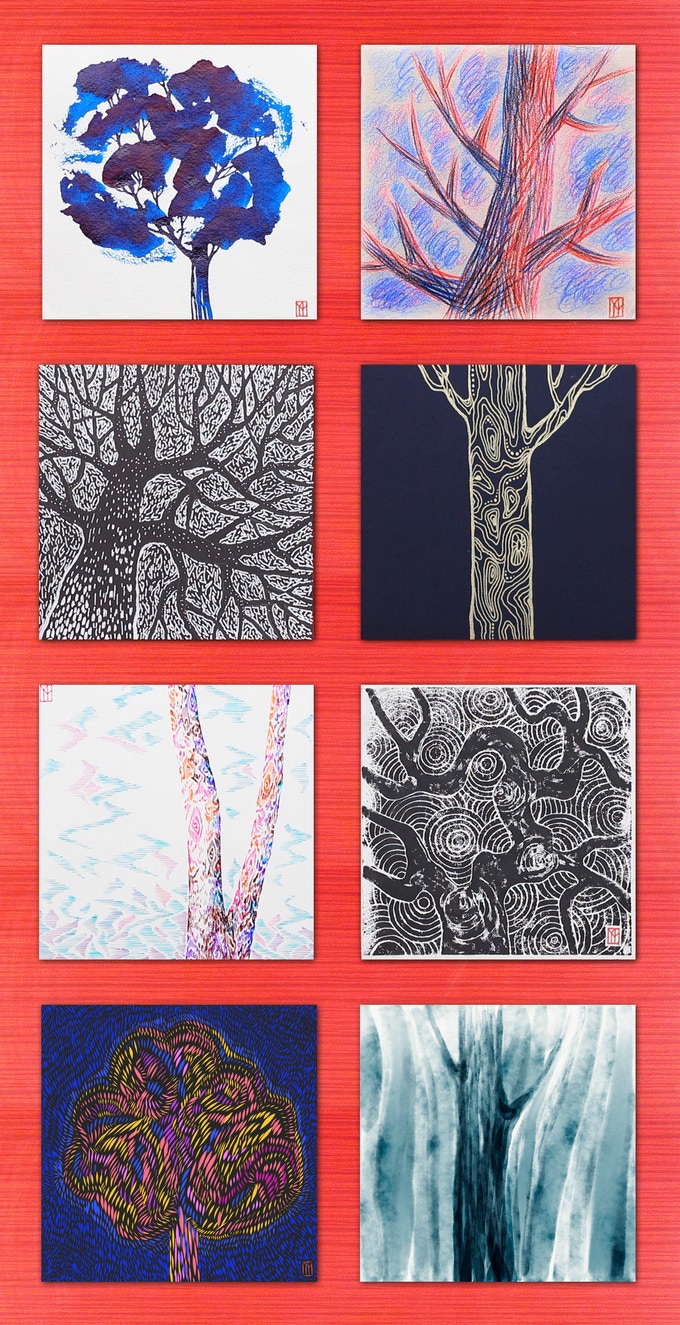 Make 100 Trees is the latest project by London-based designer-artist Margarita Mitrovic. The concept of the project is to make 100 artworks of trees, which will directly fund the planting of 100 real trees. By depicting each tree in a different style and technique, the artist aims to demonstrate their uniqueness, individuality and most importantly their value to our lives and planet. The artist explains: “There is superfluous to say that each tree is unique. In my eyes trees are live magic creatures which have their hands – branches, legs – roots, skin – bark and hair – leaves, but they also have a soul. In my career I have mainly focused on human portraits as a means to represent individual personalities through simple brushstrokes, colour and medium. In this project, I am creating “portraits” of trees through which I want to demonstrate their uniqueness and remind people how beautiful those enormous giants are! I use pens, pencils and markers to show the shape of branches and the incredible surface and texture of tree bark. On the other hand I use paint, ink and brushes to represent their density and volume when they are blooming and blossoming.”

The project joins two of Margarita’s greatest passions – Art and Nature, as her favourite activities include creating artworks in her London studio and going for long walks and hikes around the UK and beyond. “Trees are super important for our health and well-being and are vital for the environment and wildlife, but as our planet becomes more urbanised, we are losing forests and trees every day. This is a global issue and I want to use art as a tool to make a positive impact on nature.” – explains Margarita. Each artwork will be unique and original, created by the artist in a different style and technique on a standard format of 15×15 cm. A hundred works of art (made using pencils, pens, markers, ink, paint, charcoal, fabrics, thread, cardboard, photography, laser cutters, 3D printers and much more) all showing a tree, but all of them individual, just like each tree is. Margarita is launching this project through Kickstarter – a crowdfunding platform, which allows people to gather funds for their creative work. The crowdfunding will run for a limited period of 35 days (Jan 31st – March 8th), during which people can order an original artwork for £25, an artwork print for £10 or even book an art masterclass with Margarita in her studio. Once the project is complete, an art exhibition of the 100 artworks will be organised in a London gallery, showcasing them to the public before they are sent off to their new owners. Part of the sales profits will be used to plant 100 real trees, thanks to a collaboration with Trees for Cities, a UK charity that is on a mission to plant 1 million trees in UK cities by 2020.

You can see the project and support it via this kickstarter link:
https://www.kickstarter.com/projects/764720081/100-artworks-of-trees-100-planted-trees?ref=user_menu Margarita Mitrovic is a multi-award-winning London-based designer and visual artist. She applies her creative skills in a wide variety of projects, including interior design, branding, graphics and illustration. She began her career path after graduating in Interior & Spatial Design at the University of Hertfordshire branch in Moscow, Russia, and since then her experience spans from working in small interior design studios to large architecture practices in Moscow and London, as well as independent and client work in illustration, graphics and art. 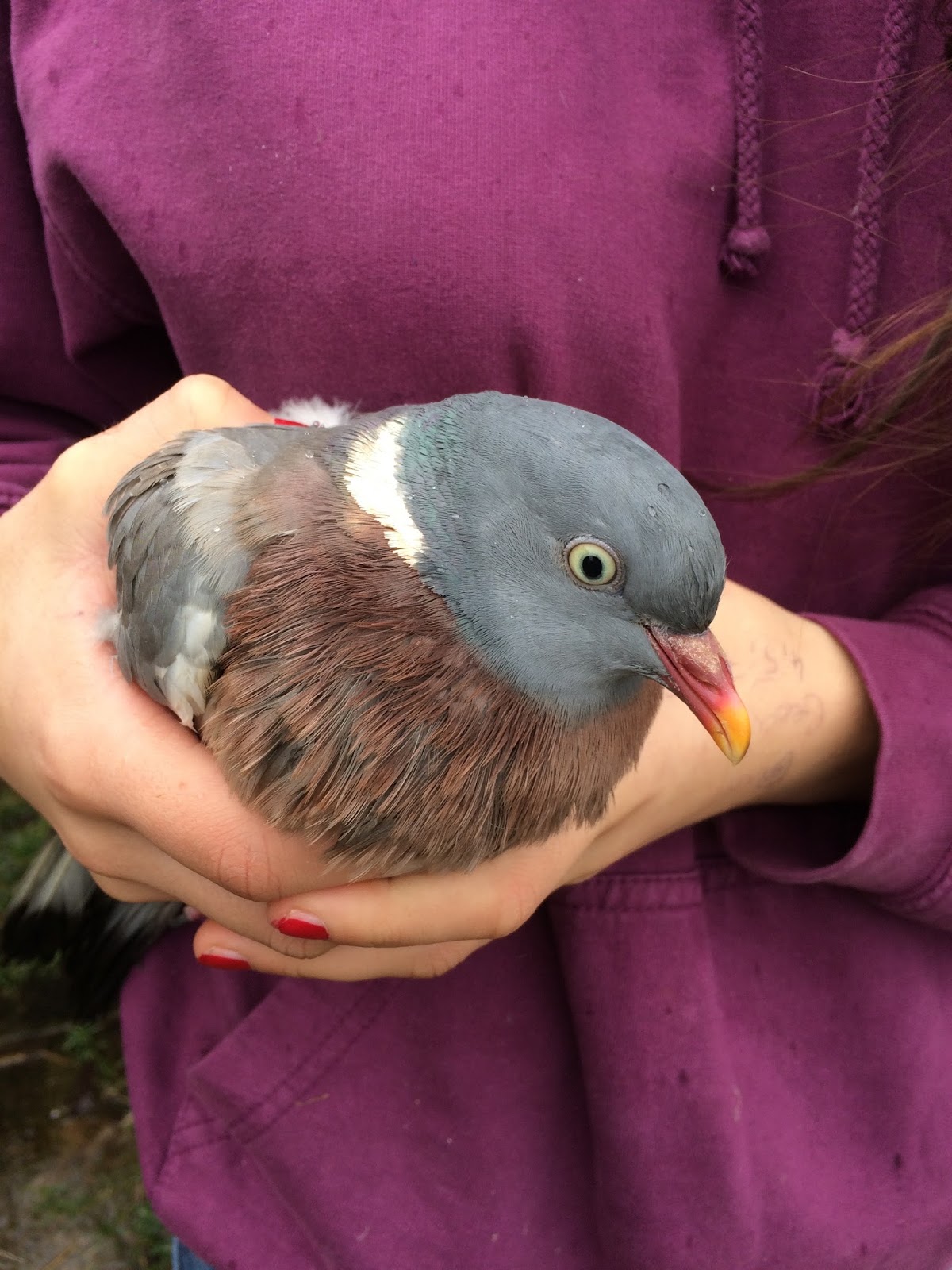 Last Saturday, 10th February 2018, I was busy revising for my GCSE exams. The weather was pretty bad and so Dad and I had not gone to the ringing station.

Dad had put some foods out in a trap, as usual, to see if he could catch something. I hadn’t been hopeful.

At 11 am, Dad ran into the house and straight up the stairs to my room. He was really excited and told me that he had caught a Wood Pigeon.

I had ringed a young bird in the nest before at Chew Valley Lake but never ringed an adult.

Once I had it in a tight grip, it was really calm and so a lovely bird to ring. It was also actually really beautiful. 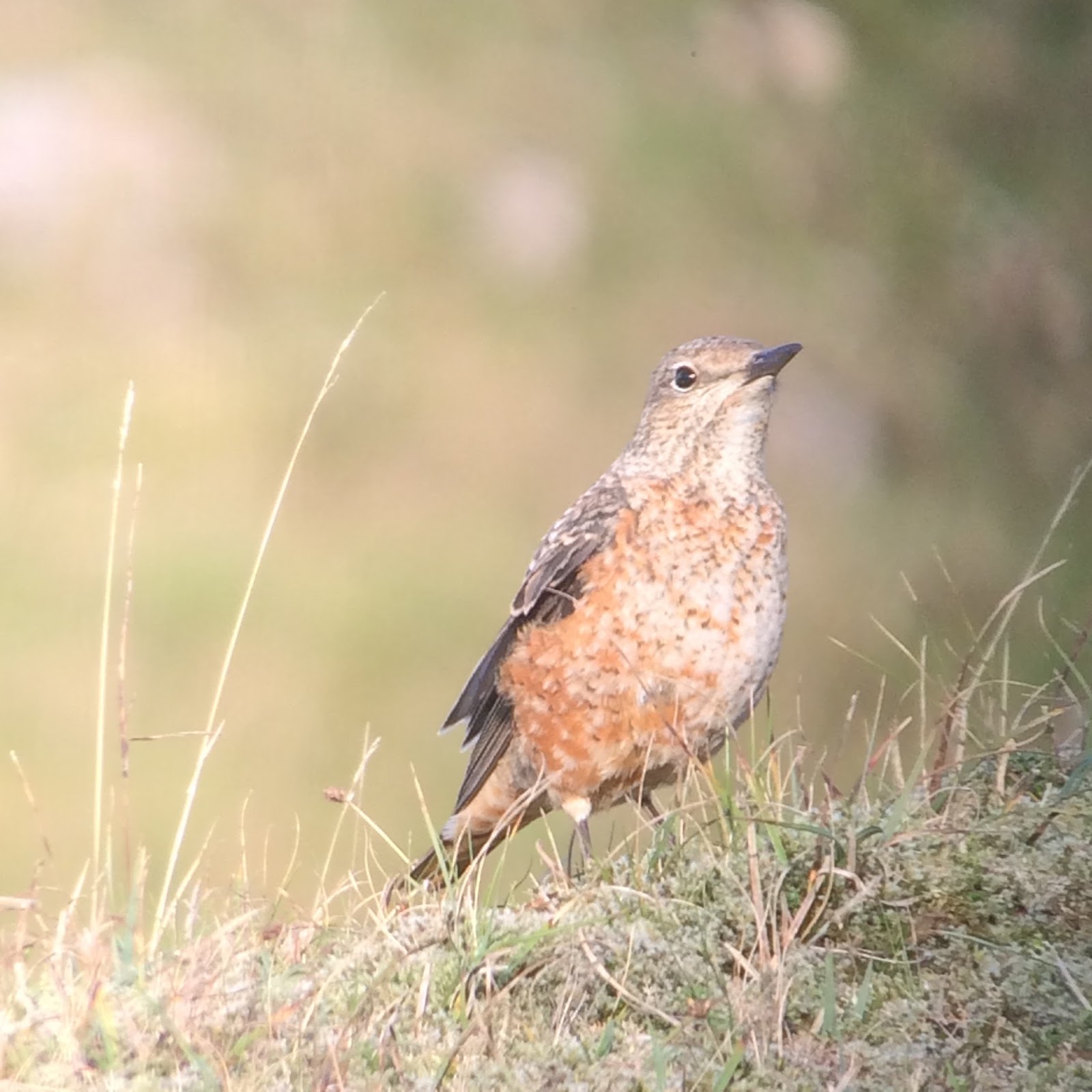 There are some days that stand out in terms of how lucky I am to have the parents I do – obsessed with birds as much as me but still prepared to put their passion alongside rather than ahead of mine.

There had been news of a Rufous-tailed Rock Thrush found in the Brecon Beacons on a Thursday, whilst I was at school. I headed to school the next day which was Friday 13th October 2017 with no sitting of the bird before I left home, so I assumed that like many others, it was a one day bird. It was my last day of term before the autumn half term holiday, so I was hoping that the holidays was going to be good for birds. This year I am in Year 11 and taking my GCSE exams in June. I have my mock exams in November so really need to do lots of revision during the holiday too.

Mum was in London and expected back that evening so that Friday was just an average day for me. We are not allowed to look at our phones at school and so I didn’t pick up the texts from my dad.

I boarded my school bus home at 3.25 pm as usual, when I saw my dad making his way from one bus to another. He knocked on our bus window and asked if I was on board? I knew I had to get off the bus, so told my mates that I probably had a dentist appointment. As I got off the bus, he whispered (so as not to embarrass me) that the Rock Thrush was still there and that we had just about enough time to get there.  What a legend my dad is. He had already seen a Rock Thrush before and all this effort was just so that Mum and I could see it.

We drove straight towards Bristol and met up in a car park with Mum and her friend Lorna, who was staying with us. It was to be Lorna’s first twitch! They had been in London for a couple of nights and Mum had rushed back early to meet us.

Dad drove pretty fast to get to the beautiful Brecon Beacons in Mid Wales, getting us there at 5.30pm.  As we rushed along the path to where the bird was being seen, we bumped into our long time birding friend and big British twitcher Julian Thomas. He told us that the Rock Thrush was still there but was being seen a little way away from the path. It had been raining and was very cloudy, so the light was fading fast.

When we got to the bird, it was perched in view, but some way away.  Once we had seen it, although not fantastically, it was a big relief.  We then watched and waited and eventually were rewarded with slightly better views just as it started to rain. It was my second new bird of the autumn and great to see this European Rock Thrush.

Needless to say, Lorna was not overly impressed with her first (and probably last) twitch!
After some chips in Abergavenny, we made it home by 9 pm. On the way home, I posted my very terrible “record shots” on twitter, much to the hilarity of my birding followers. The Rock Thrush was also a new bird in the world for me (4724), which was fantastic.

The Rock Thrush stayed around for a while, which was lucky, as we were able to return on Monday 30th October 2017, which was an inset day before I went back the next day.

This time the weather was clear and sunny and the bird really confiding. We got some brilliant views and had another lovely birding day out with my parents. 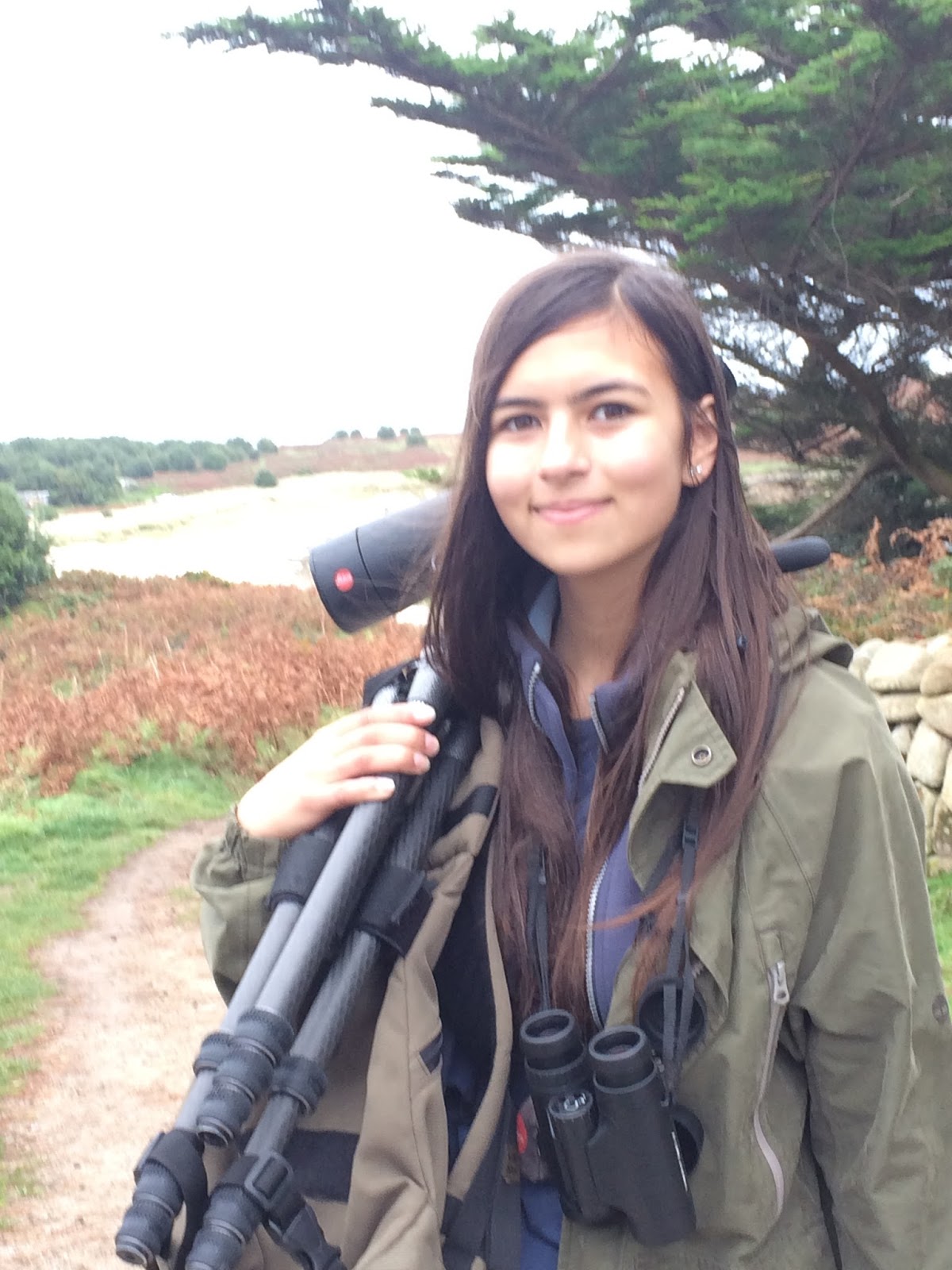 During the week, we heard the news that a Cedar Waxwing had been found on St Agnes on the Isles of Scilly. This is part of a small island chain off the southwest tip of Cornwall, Southern England and my favourite place in the world, so I was really excited that I might be visiting again.

This was a bird that many twitchers had seen in early 1996, but dad missed it as he was busy in his new relationship with mum and then the day he did finally go up to Nottinghamshire, he missed the bird. It was one of those birds that Mum and Dad really wanted to catch up with and so I was really appreciative that they waited for the weekend to take me with them.

We were up in the middle of the night to drive down to Penzance, to get the boat to St Mary’s on the Isle of Scilly. We had a phone call from our great friend Rob Lambert who was staying on St Mary’s as usual to say that his wife was on the train, which had run into trouble on the way to Penzance. She was therefore in a taxi speeding to the quayside and could we look out for her and help her with her suitcase. Dad is great at that kind of thing and made sure Lucy [McRobert] got onto the boat. Mum and I were already asleep on the bottom deck of the boat, trying to avoid seasickness.

As soon as we arrived in Hugh Town on St Mary’s, a whole load of us rushed off the Scillonian to jump on the small boat to St Agnes, which was waiting for us. The boat was packed with people and it was later to be the source of online discussion about how most of the people on the boat were older white men. Some really were pretty old, which I thought was pretty amazing. I hope I’m still twitching when I’m 90 years old!

Cedar Waxwing is the American version of our waxwing and it was fantastic to see. It was also a new bird in the world for me, which is always a bonus and was 4,723 which feels like I’m on the downward roll to 5,000. I want to try and see 5,400 bird species in the world by the time I’m 18 years old, which would be half the world’s birds.