Chris Packham’s Peoples Walk for Nature is this Saturday 22nd September 2018, meeting in Hyde Park, London at 10 am with speakers starting at midday and the march between 1 pm and 2 pm.
https://www.youtube.com/watch?v=YbQDEb6QX6g&feature=youtu.be 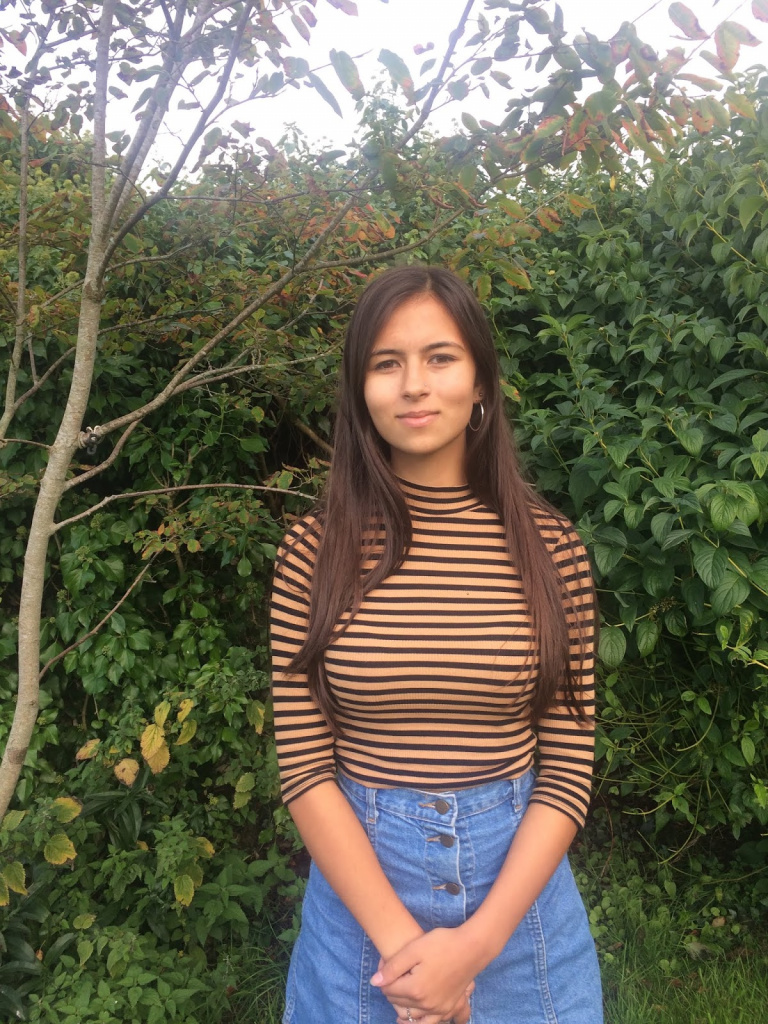 Today, Chris Packham has published “The Peoples’ Manifesto for Wildlife” with 18 Ministers or experts in a number of areas ahead of the march http://www.chrispackham.co.uk/a-peoples-manifesto-for-wildlife 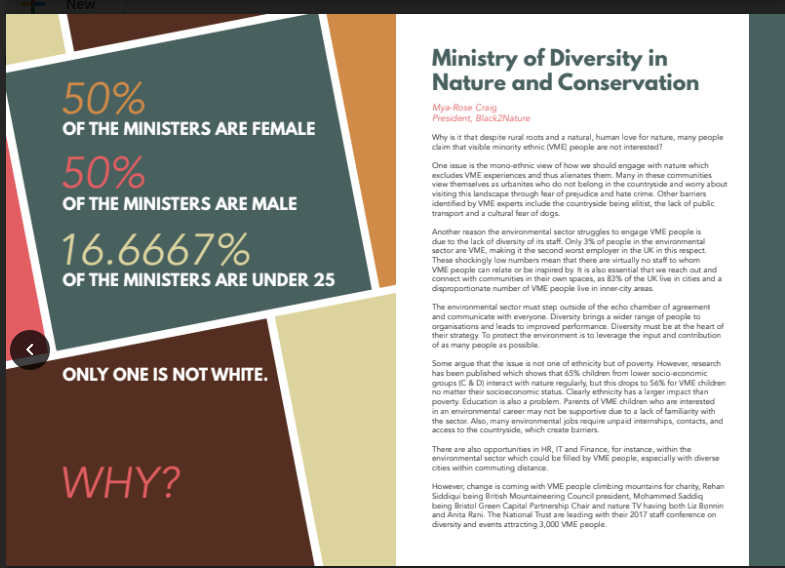 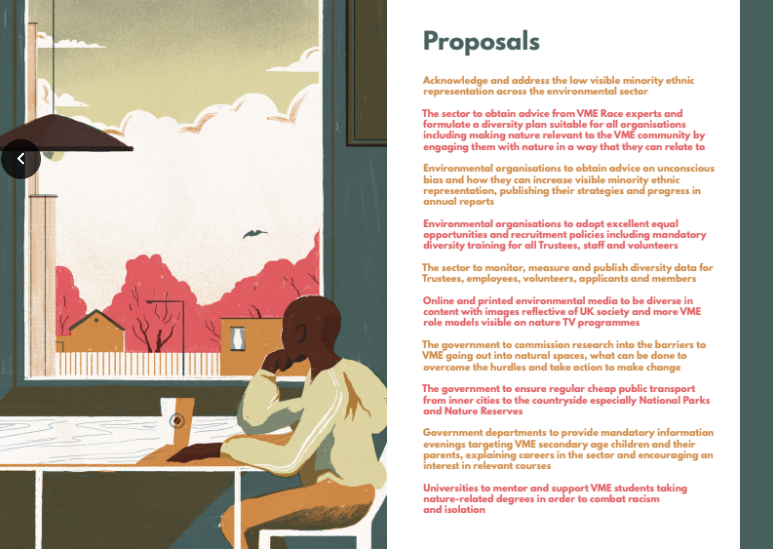 This is a Podcast from Lush intervewing many of the Ministers http://player.lush.com/channels/soapbox/radio/soapbox-voices-peoples-manifesto-wildlife
If you don’t know anything about me, this is what I have been up to since I started campaigning and raising awareness about the lack of VME (visible minority ethnic) out in nature and green spaces since January 2015 when I was 12 years old. I have given an explanation of my use of VME below.

Even if you can’t make it to the march, please post on Chris’ website on his Wonder-wall
http://www.chrispackham.co.uk/wonder-wall

First – I am no expert. These are just my thoughts and views. I would love to read more research on this topic.
Second – I would describe myself as Dual Heritage British Bangladeshi.
I have chosen to use the term “Visible Minority Ethnic” (VME) in my ministry. This simply means minority ethnic people who describe themselves as non-white; People who might be discriminated against in the street or who might feel worried about venturing to the countryside because of fear of hate crime (due to their visibility as a minority ethnic person). It was suggested to me as an option by a race expert, Monira Ahmed Chowdhury.
There are lots of terms being used as of 2018 to describe collectively people living in the UK, who for want of a better description, are non-white. These are some of them and what troubles me about them: Non-white or not white
This should never be used (although I have just done that for clarity). It is negative and refers to people by their skin colour alone, which is derogatory.

Black British
My mum shows her age because she started using this term in the 1980s, to include all non-white people, as one political force. I don’t like referring to skin colour and think we have moved on from this. I really don’t like this term at all.

BAME – Black Asian Minority Ethnic
BME – Black Minority Ethnic
This is used nationally by most organisations to describe people who are of non-white descent. It specifically includes people whose ethnicity is African or Caribbean, South or East Asia in the first and people whose ethnicity is anything other than English, Scottish and Welsh. Both single out specific ethnic groups, this can be divisive and exclusionary. They include white people who are from places such as Irish or Western or Eastern European.  This is not ideal for analysing racism against people of non-white descent. For example, 3% of the environmental professionals are BAME but only 0.6% are non-white.

Race
“Race and ethnicity are often used interchangeably but it is useful to be clear about the difference. Race is a socially constructed term without biological merit that has historically been used to categorise different groups of people based on perceived physical differences.”Universities Scotland refers to a 1983 House of Lords decision that suggests an ethnic group would have the following features:

It is important to remember that everyone has an ethnicity and ‘white British’ is an ethnic group. Bhavnani et al (2005, p. 213) point out that it is common in British culture for ‘ethnic’ to be wrongly used as synonymous with non-white or not-western, for example with ‘ethnic clothes’ or ‘ethnic restaurants’.”

I do not like the word “race” (as in a mixed-race) as there is only one human race and it is wrong to try and say otherwise.

ME – Minority Ethnic
This is a group of people who differ in ethnicity, colour, national or cultural origin from the majority population in the country. It does not include religions that span wide distribution, such as Islam (apparently). Some argue that people of non-white descent are the global majority and describing ourselves as a minority is doing us down. ‘Ethnic Minority’ tends to be reversed to refer to ‘minority ethnic groups’ to highlight the fact that everyone has an ethnicity and the issues being referred to relate to minority groups in a UK context and the discrimination and barriers that they face.

EM – Ethnic Minority
This used to be used commonly but has fallen out of favour. Sociology Professor Tareq Modood prefers it. ‘Ethnic minority’ places the emphasis on ethnicity as the main issue. There can be a tendency in our media and language to see ‘ethnic’ as synonymous with not-white and so the term could be perceived as implying the issue is with people being not-white, or non-white people being the issue.

POC – People of Colour
This has been used in the USA for some time. Before this, coloured was used by African Americans to describe themselves. However, this is a word with very negative connotations in the UK, as it was used as a racist slur up until the 1970’s. Isn’t it confusing to tell people not to use a word because it’s racist and then to ask them to use it again?  It was also used as a derogatory term to categorise dual heritage people under apartheid, South Africa. I also don’t like the reference to skin colour. Sorry, I just can’t get behind it.

Global Majority
I understand that non-white people are in the vast majority globally. I could get behind this term if it was taken up worldwide. However, there is something a little strange about it. Doesn’t it imply that the issue of racism is only between white and non-white? What about Rohinga slaughtered in Burma? What about the killings in Rwanda? I don’t think it is that straightforward. Every country had majority ethnicities and minority ethnicities, that need to be differentiated when talking about racism and discrimination. So I think at the moment I am still going with Minority Ethnic.

Dual Heritage
This is the term I prefer when talking about people with mixed heritage or ethnicity.
Black and Brown
I don’t like this because it is a reference to skin colour but nobody is actually Black. I find it quite offensive. If you look at a make-up brand that covers all skin tones, such as Mac, not one of their foundations is actually white or black. They are all tones of brown. Not everyone falls in with this colour reference, what about Turkish people or Chinese people, do they really fit into “brown”?