You might think that making nest boxes in sessions at Cubs and Scouts might not make much difference beyond the actual boxes that get put up. You’d be completely wrong. 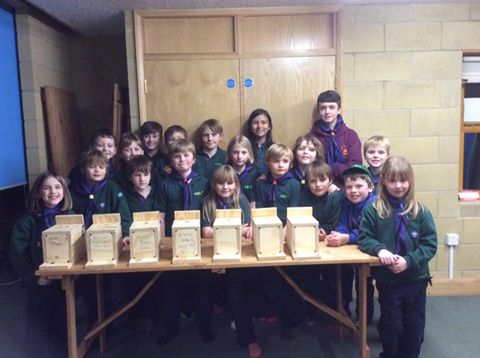 We made 15 boxes in Cubs and 10 boxes on Scouts which were spread between the member’s primary schools and our comprehensive, Chew Valley School, who put them up in the wildlife club.

However, the sessions themselves were practical and enjoyable but at the same time, they did a bird quiz naming birds, and listened to a talk about Antarctica where apart from penguins and seals, I talked about my key message, “fight to stop anyone who wants to do anything to damage Antarctica”. Afterwards, lots of them contacted me asking me to post a video I mentioned of a Leopard Seal skinning a penguin.

Both groups were going on to do the RSPB Big Garden Bird Watch at the end of January and a nature badge and environmental badge, as well as checking on the nest boxes to see if they are being used and next year whether they need to be cleaned out.

Each of the local primary schools had a nest box and Chew Valley had 16 nest boxes. This is the link to the Chew Valley Gazette article about the project which is on page 46 http://bit.ly/25DqdpY and this was an article on the school website about the boxes http://bit.ly/1W1KSQj