Our birding trip was organised by Madagascar Tour Guide (madagascar.tour.guide@gmail.com), who was really well organised. Our guide for most of the trip was Julian, who was brilliant at digging out the birds as well as sorting things out for us along the way. The company is owned by Andre who came to meet us as we passed through Tena. I would highly recommend them and the prices were modest.

On Sunday 5th August 2018, my mum and dad picked me up at 7.30 am for Nairobi YMCA, to go straight to Nairobi NP for a final day of birding.

With a new bird snuck in right at the end, I was pretty happy to be finishing that bit of the trip on 4,836 including a couple of new birds I found after taking into account the latest IOC World List update. The latest total list for the world is 10,711, so if I want to see half by the time I’m 18 years old, then that would be 5,356 which it will be touch and go whether I manage in time.
We were dropped at the airport at 6 pm for our 10.05 pm Air Kenya flight to Tana, the capital of Madagascar.

After dinner at the airport, we finally took off about 45 minutes late. Our flight was actually stopping on the Comoros Islands, which didn’t seem so bad, except that loads of people got off, they cleaned the plane, loads of people got on and they had to do lots of swapping people around presumably because the checking in process wasn’t very efficient. I was so exhausted after 16 nights of camping and late nights with my friends, I passed out on the flight, somehow flat over two seats with my head on mum’s lap.

Monday 6th August 2018, we arrived in Madagascar.  Unsurprisingly, our fight was very late arriving in Tana and then our pick up wasn’t there, so we got a taxi in a VERY old french taxi with a guy whose passengers hadn’t turned up either, so we were both happy. Tana is in the mid-east of the country.

Our hotel was called The Saka Manga, which is the title of one of the Tin Tin books that were based on Madagascar. It was a lovely hotel and we had a fantastic 2 bedroom apartment, which was great to hang out in. We decided to stay up for 15 mins, have a 6 am breakfast, before heading to bed. Madagascar was a French colony and got independence around 1960. French is the second language and lots of people speak it as it is taught in schools and so it is also popular with french speaking tourists. You could also tell it was a French colony from the food. At breakfast, they had the very best soft french bread and pain au chocolate, which was brilliant.

By 7 am we were in bed, exhausted from our night flight. We were being picked up at 3.30 pm and so plenty of time to sleep through.

We got up at 3 pm, having skipped lunch, with a quick change before meeting Andre’s brother, who runs Madagascar Tours. We drove to Tsarasoatra Wetland, to try and get a few of our first endemics. The Lake is an artificial one and apparently a Madagascan Queen in about 1840 had the lake built by lots of slaves.

Almost the first bird I saw was a Dimorphic Egret, which is my favourite type of new bird, a tick back. Mum and Dad saw this without me toward the end of their time in Kenya and so it was brilliant to catch it up. As well as this, I saw 12 endemics for Madagascar which were fantastic, the best being Meller’s Duck, Malagasy Kingfisher, Malagasy White-eye, Malagasy Kestrel and Malagasy Mannikin.

Back at the hotel, we met up with Andre by the pool to go through the itinerary and check a few things over. There had been talking of being picked up at 4.30 am for our morning flight which I was not looking forward to, but Andre had been to the airport himself to find out what time our flight was due to go (as it is not published accurately) and it was agreed that we would be picked up at 6.30 am after breakfast. The thought of a freshly baked pain au chocolate cheered me up. Dinner was at the hotel restaurant which had a great ambience, being full of tourists from across the city. It was also ridiculously cheap with most of the main veggie courses costing only £2.50.
We tried to get an early night so that we didn’t start our trip exhausted.

Tuesday 7th August 2018 we were up at 5.30 am for a lovely french baked breakfast, before being picked up to go to the airport. Andre’s brother met us again and explained that the fog was bad which was why they were 10 minutes late. Mum and I immediately fell asleep in the car but dad later told us it was a stressful journey because we were stationary for so much of it. Our flight was at 9.30 am and we managed to get there at 8 am with half an hour to spare before check in closed.  We had heard that Madagascan flights were not that reliable, so we’re not surprised to hear that our flight was delayed because of bad weather in the southwest where the flight was coming from and where we were going. It was 11.30 am before we took off for Toliara in the South West of Madagascar, so once we were picked up by our guide for the trip Julian and the local guide for South West Madagascar Jean-Marie, we went straight to a supermarket to buy water and emergency provisions (like biscuits for me) before going to our hotel, The Victory Hotel for lunch.

We were meant to be going to the Andatabo Forest, which is a dry wooded area for our main target of the endemic and localised Red-shouldered Vanga but because of our delayed flight, we instead visited the nearby privately-owned Toliara Arboretum.

Here, we bumped into our first group of birders let alone a bird Tour. It was a Rockjumper Tours group, whose leader was really friendly to us. Dad had actually thought about us going on this tour, but it started before I had finished my school trip in Kenya, so had to be ruled out.

When we got back to the hotel, the Rockjumper Tours group arrived just after us, which was another co-incidence.

After dinner, I decided to take advantage of the lull and get an early night.

Wednesday 8th August 2018, we opted for a 5.30 am breakfast before going straight out birding to Andatabo Forest, which is a dry forest which we had to miss the day before.

The main target was Red-Shouldered Vanga, which you only get in this forest. This is a really special bird for me and one that I really want to see. Phoebe Snetsinger is still the top female world birder, almost 20 years after she died in Madagascar in a car accident. She was an amazing woman who was passionate about birds and who only started world birding after she was diagnosed with cancer. Really inspirational. Red-shouldered Vanga was the last new bird that she saw before she died. I think that seeing one would be really really emotional.

When I Googled “Phoebe Snetsinger birder”, this is a screenshot of part of the page. It made me giggle, as I love Jack Black and “almost” met Greg Miller (the birder Jack Black was playing) on a mountainside in Arizona a couple of years ago. 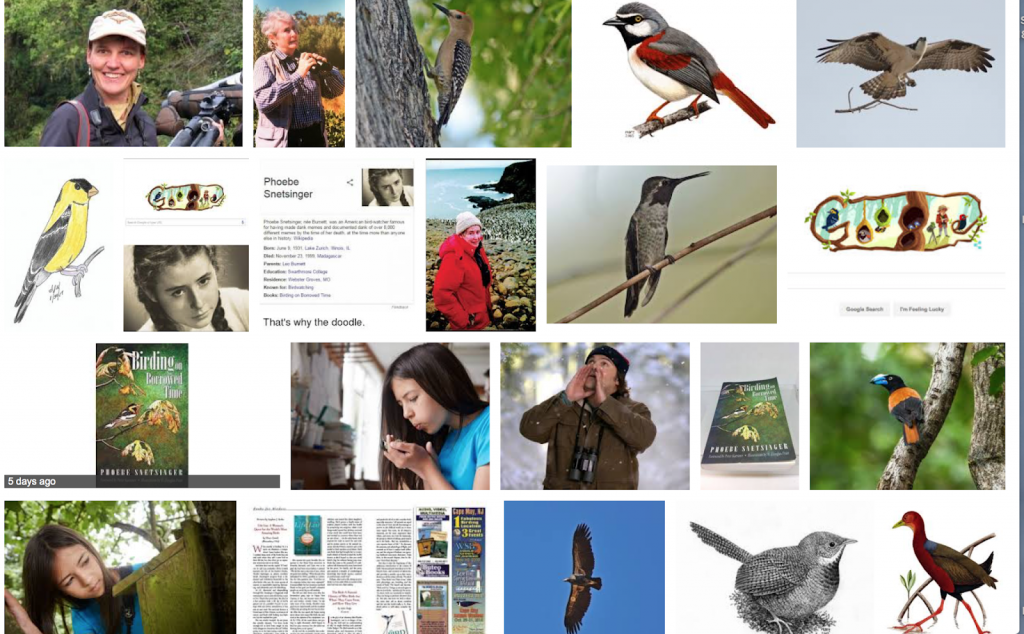 After two hours, we had seen Common Newtonia, Crested Drongo, Subdesert Brush Warbler, Soulmanga Sunbird and Lafresnaye’s Vanga but no sign of Red-shouldered Vanga.  I felt so disappointed but this was meant to be. The only thing that cheered me up was that we would be able to try again when we returned to Toliara in a couple of days.

From here, we drove straight to the quayside. First, we loaded our bags into a wooden cart pulled by two zebus, which then took us across a muddy bay as the tide was out, to a waiting speed boat to which we were transferred. Then we had an hour and a half speed boat journey to the beach resort of Anakao which is further south from Toliara and opposite the island of Nosy Ve, where were birded early afternoon.

The target for mum and I was a Red-tailed Tropicbird, which bred on the island, but which dad had seen before. There were still large young on nests under bushes as well adults flying around, which were stunning. We also saw Madagascan Cisticola on the island which was a bonus. I was hoping to catch up with Crab Plover and Sanderson’s Terns, but I think it was too early for them this far south.

We were back on the beach by 3.30 pm, so after a quick Littoral Rock Thrush twitch behind our bungalow, we had loads of time to swim and sunbathe, which was fantastic and restful. It always makes a change to get some R & R on a full-on birding trip. It’s really is idyllic here with white sand and the island across the water.

Just as it turned dark, we heard nightjar calling outside and immediately found Madagascan Nightjar behind us. Julian and Jean-Marie came to find us at this point and so we’re able to help us to find another couple of birds.

After a very expensive dinner, we made sure we were in bed by 9.30 pm, as tomorrow we were being picked up at 4.30 am with a packed breakfast.

Today, we were up at 4.00 am, to leave at 4.30 am with a few bits for breakfast to drive southeast to Tisimanampetostra Lake and Nature Reserve. It was a two-hour drive to the lake, so I managed to sleep the whole way and still arrived at 6.30 am just as the sun was rising. We had another local guide with us and saw a whole load of endemic birds, especially after birding in the dry forest. The best were Madagascan Plover, which is critically endangered and there are only about 3000 left, Madagascan Sandgrouse which only has a few birds left here due to hunting, Greater and Lesser Vasa Parrots, Archbold’s Newtonia and the stunning Verreaux’s Coua.

We looked in the dry forest for Red-shouldered Vaga, but with no luck, as they are even rarer here. Maybe tomorrow…

As it was getting hot, we headed back to the beach and were thereby midday, so that I could spend the whole afternoon sunbathing, swimming and reading.
Madagascar List – 62Number of new life birds – 39