During 2015, I decided that as well as blogging on my blog, I would also post on the BBC Wildlife Magazine blog, in the Local Patch Section http://bit.ly/1QufmKe. This actually was very time consuming but worthwhile just to be involved.

In early March 2015, I was blogger of the week with my post about surveying Spoon-billed Sandpiper in Bangladesh, which is a critically endangered bird that was down to 200 pairs in the world.

In the summer, BBC Wildlife Magazine announced that they would be giving awards, including one for Young Blogger of the Year.  They did not announce the winners until their January 2016 magazine. In the young Blogger Section, Zach won, who blogged every day for a year.  However, I was really pleased to be announced as highly commended in that category, which was amazing. 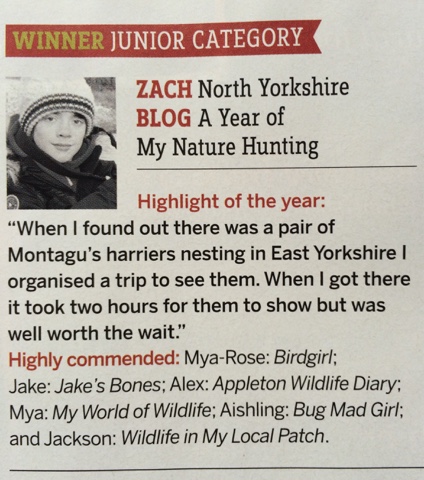 Over the year January to December 2015, I posted 270 times on the BBC Wildlife Magazine local patch reporter blog and had 51,940 views on my posts.  Both were the highest of any blogger.  So thank you to all my followers and the people who read my posts.