We Have A Dream – PRE-ORDER

I am really proud to announce that my first book, published by Magic Cat, comes out on 5th August 2021.

We Have a Dream: Meet 30 Young Indigenous People and People of Colour Protecting the Planet (Hardback)

Or choose an edition with a personal message 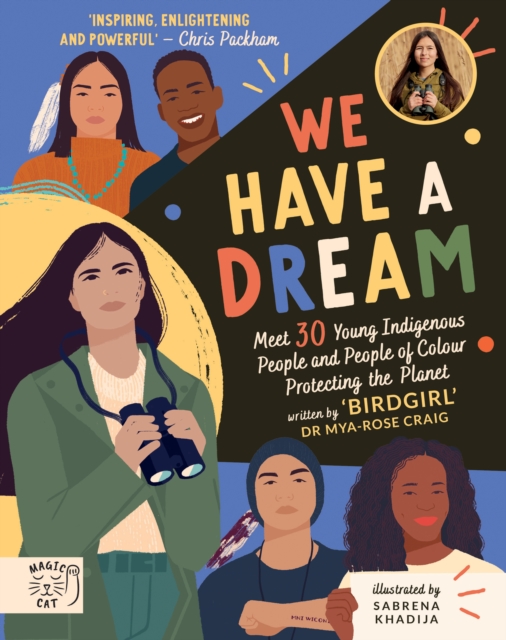 Indigenous people and people of colour are disproportionately affected by climate change, yet often are not heard in global conversations.

As a British-Bangladeshi environmentalist and race activist, I was interested to hear and amplify the voices of young environmentalists of colour from around the world who are usually ignored. I spent months researching and locating 30 young environmentalists who were working on different types of projects, all over the world. I spoke to these incredible young people, many of who had been campaigning since they were 8 or 9 years old, about what they think are the issues and what needs to be done to make a change.

From wildlife conservation to clean water, air pollution to plastic waste, climate justice to climate strikes, the time has come to listen to a generation of young people of colour demanding urgent change for the world they will inherit.

Environmental and diversity campaigner Mya-Rose Craig aka Birdgirl speaks to 30 Black, Indigenous and People of Colour campaigners from around the world, including; Autumn Peltier, Vanessa Nakate and Lesein Mutunkei. These communities are disproportionately affected by climate change, yet often aren’t heard in global conversations. From wildlife conservation to clean water, from air pollution to plastic waste, from climate justice to climate strikes, the time has come to listen to a generation of young people demanding urgent change for the world they will inherit. 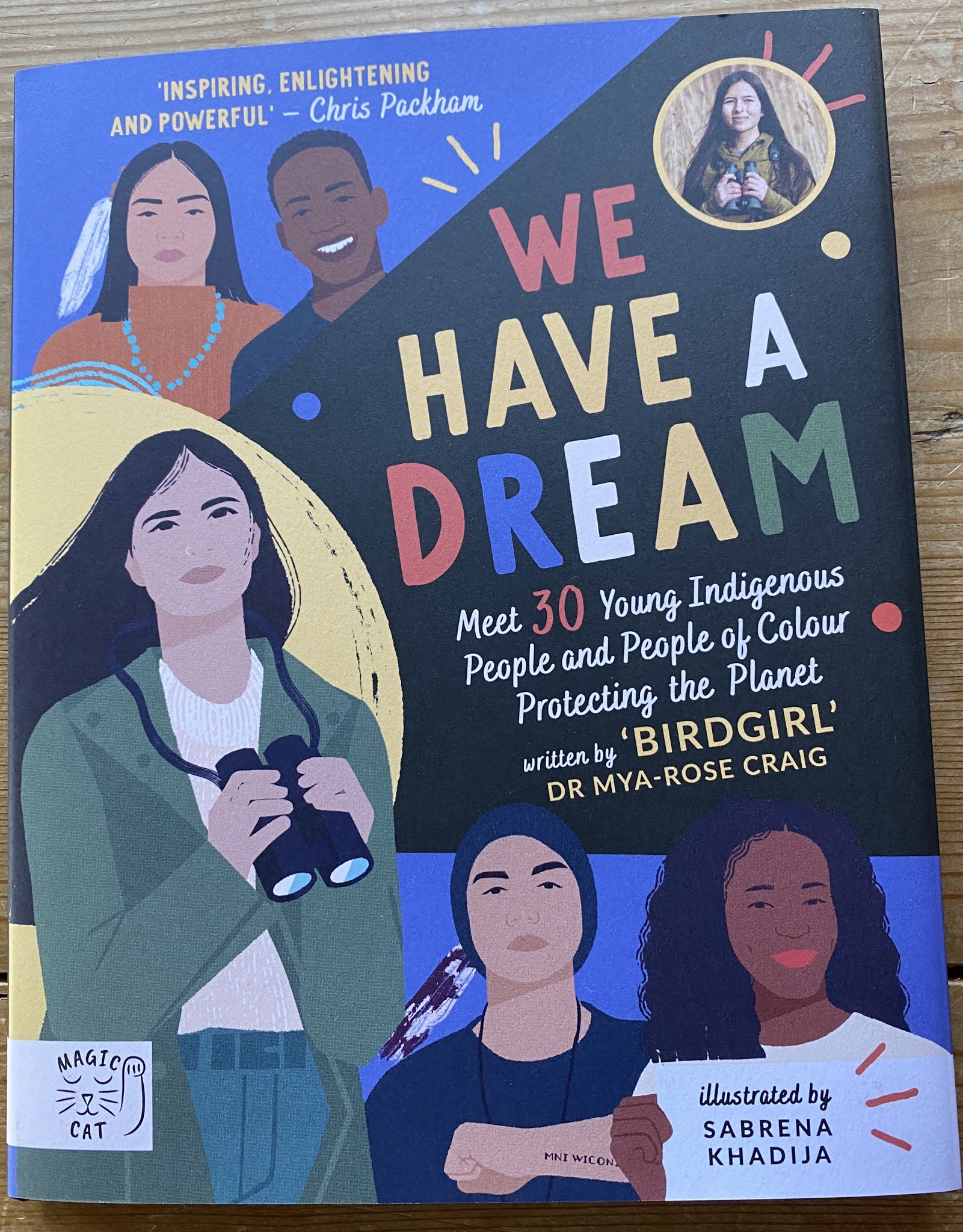 ‘Extraordinary voices from around the globe’
– Steve Backshall

‘A moving and thought-provoking collection of stories’
– Liz Bonnin

‘If there was ever a book for now, this is it’
– Gillian Burke 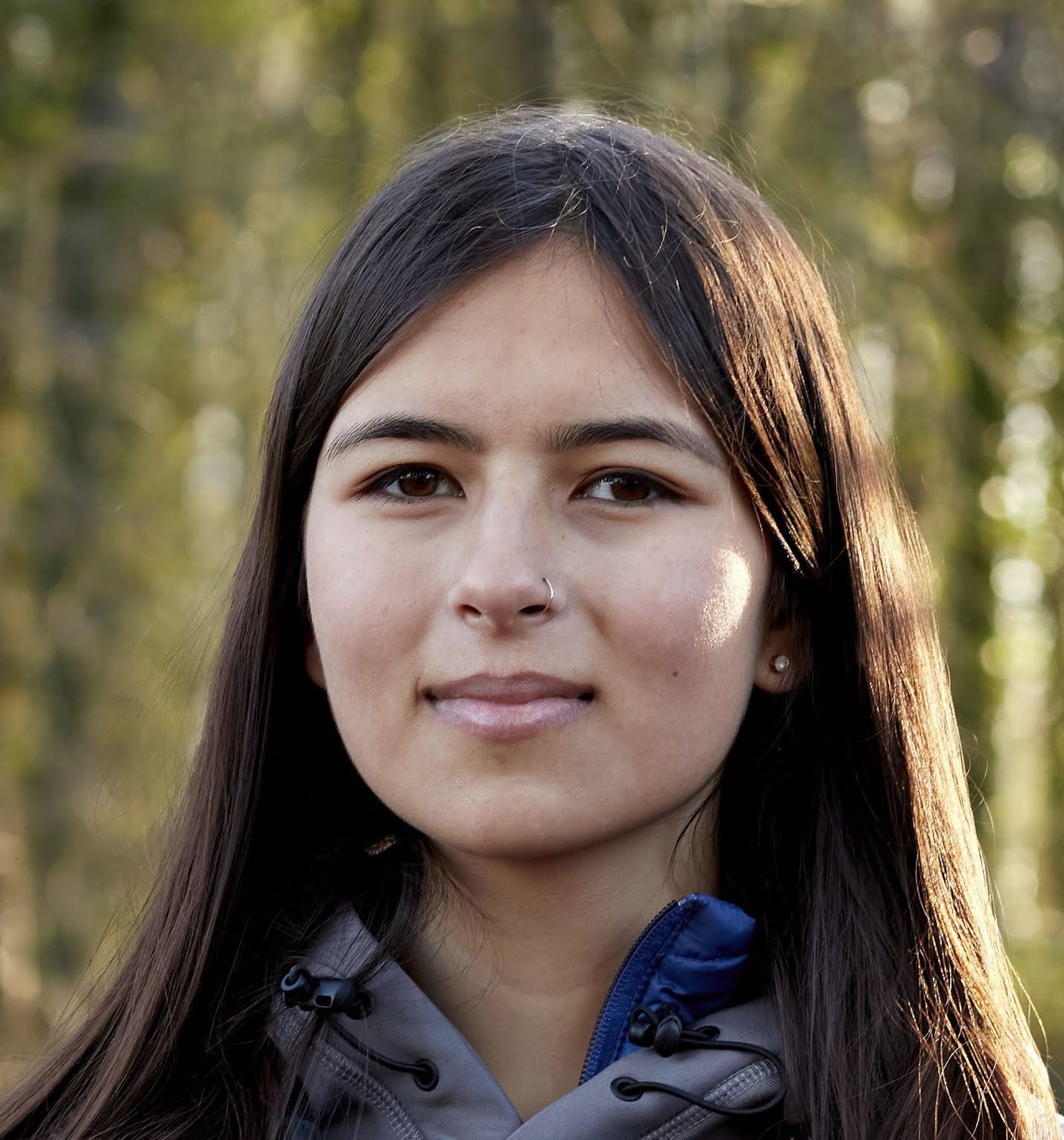 Young British Bangladeshi Dr Mya-Rose Craig AKA Birdgirl from the Chew Valley near Bristol is a prominent birder, naturalist, conservationist, environmentalist, race activist, writer, speaker and broadcaster, writing the Birdgirl Blog since January 2014 when she was 11 years old, which is extremely popular with both adults and children and now has over 4 million views.

She has travelled all her life, visiting all seven continents when she was 13 years old, giving her a global perspective on conservation and the needs of indigenous peoples. She writes posts about birding, nature, stopping climate breakdown, conservation and stopping species loss, other environmental issues, and racism from around the world.

Expertise in birds and nature
She has been birding all her life with her parents and sister as well as birding abroad. She is passionate about birds, obtained her BTO Bird ringing licence at the youngest possible age of 16, takes part in the BTO Nest Record Scheme and became the youngest person to see half the worlds’ birds when she was 17 in Brazil in August 2019.

Climate Activist
Mya-Rose has been highlighting the urgent need to tackle climate change since she was 8 years old, raising the issue with pupils, teachers in school and local people. She continued with her campaigning from January 2014, blogging about climate change and quickly building a huge following and reaching 1 million views. In 2015, she was recognised for her climate campaigning work by being made a Bristol 2015 European Green Capital Ambassador along with Miranda Krestovnikoff, Hugh Fearnley-Whittingstall, Tony Juniper, Kevin McCloud and Simon King and spoke at the Bristol Climate Change Rally Nov 2015in front of 3,000 people. She continued writing, speaking and campaigning about the need for governments and big businesses to take urgent action to stop a climate catastrophe, particularly within the context of Bangladesh being at the top of the list of countries that will be most affected, the need for Global Climate Justice and a fair transition. In 2019, she camped and protested at Extinction Rebellion uprisings in London and Bristol, appeared in the video that launched the successful Stop Bristol Airport Expansion Campaign, set up XR Chew Valley, is a Bristol Youth Strike organiser, speaking three times at the Bristol Youth Strikes in March, May and July 2019 and sits on the Bristol Mayor’s One City Environmental Sustainability Board. In February 2020, she shared a stage with Greta Thunberg in Bristol, speaking in front of a crowd of 40,000 youth strikers. Mya-Rose also campaigns and gives talks arguing for global climate justice and a fair and just transition.

Conservation work
As well as educating people about the benefits of nature Mya-Rose has also campaigned to protect species from extinction and fight against environmental damage since she was 8 years old, then in January 2014 starting to blog about conservation issues such as palm oil, GMO, pesticides and other issues, for instance, campaigning for the immediate clean up of a devastating oil spill in the Unesco World Heritage site, the Sundarbans mangroves in Bangladesh, writing in the American Birding Association Blog and raising $35,000 for the cleanup in 3 days. She has travelled all her life, visiting all seven continents when she was 13 years old, giving her a global perspective on conservation and the needs of indigenous peoples.

Awards
In 2014 Mya-Rose was listed with singer-songwriter George Ezra and Game of Thrones actress Maisie Williams as one of Bristol’s most influential young people. She was nominated in the Birdwatch Magazine Birder’s Choice Awards 2015 in the Blogger of the Year category and she was the runner up after Mark Avery and was nominated in the Bristol Young Heroes Awards 2016. In 2017 she won the Royal Bath and West Show Environmental Youth Award, she was the Minister of Diversity in Nature and Conservation in Chris Packham’s A Peoples Manifesto for Wildlife. In 2019, she was listed in Bristol Powerlist 2018, The Guardian’s 10 everyday heroes fighting to save the planet, was nominated in the Birdwatch Magazine Birder’s Choice Awards 2019. Conservation Hero of the Year with Sir David Attenborough, Greta Thunberg and George Monbiot. Coming joint second after Greta Thunberg was included in the Bristol Powerlist 2020, a list of the City’s 50 most powerful and influential people and The Guardian’s Top 15 World’s Biodiversity Activists.

Honorary Doctorate
In February 2020 Mya-Rose became the youngest person to be awarded an Honorary Doctorate of Science D.Sc. h.c from Bristol University, one of the top universities in the UK and is receiving it for her five years of campaigning for diversity in the environmental sector. The sixth-former, yet to finish her A-Levels, is being recognised for her activism and the much-needed pioneering change through Black2Nature including nature camps and her Race Equality in Nature Conferences. 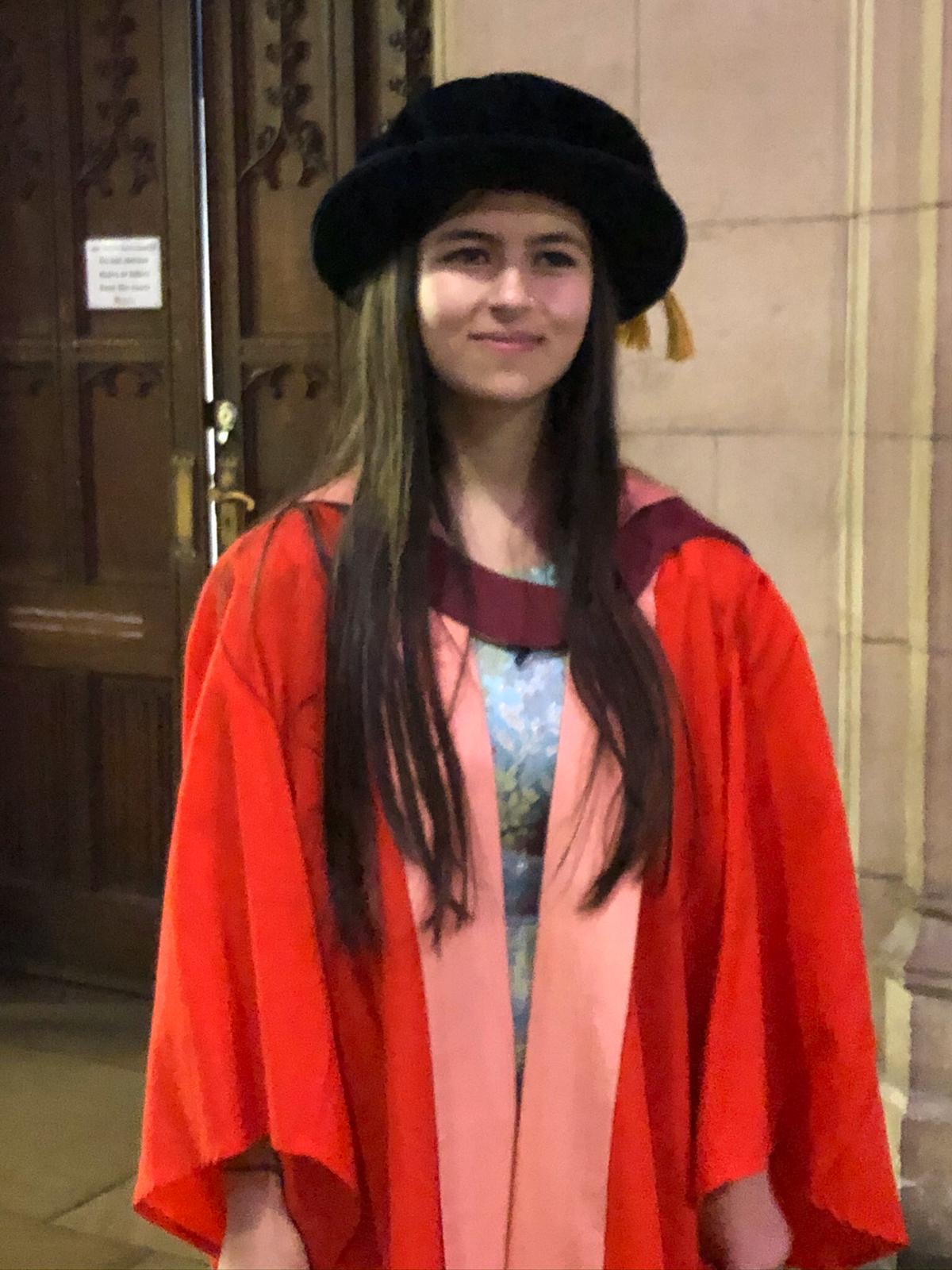 Connecting with children
Mya-Rose has huge experience engaging children and teenagers of all ages, ethnicity and socio-economic backgrounds with nature and environmental issues, having engaged approximately 50,000 so far. As President of her organisation Black2Nature she has led the fight for equal access to the natural environment for Visible Minority Ethnic people, organising nine nature camps, Camp Avalon, for VME children and teenagers and two high profile conferences, Race Equality in Nature and is organising more for 2020. She also wrote to five of the biggest NGO’s in 2015, after her first camp, asking them what steps they were taking to make their organisations ethnically diverse and has continued putting pressure on nature, conservation, environmental, environmental education and wildlife film-making sectors to change. In 2020, she has two teenage camps being arranged in conjunction with the RSPB and hopes that these will expand over the next 3 years.

Race Activist
Her first conference was in 2016, which aimed to increase the ethnic diversity in nature by looking at the barriers to Visual Minority Ethnic (VME) people going out into nature, what can be done to overcome these barriers and how we can create VME role models. Speakers included Bill Oddie, Kerry McCarthy MP, Stephen Moss and Dr Richard Benwell. She also organised a second conference, Race Equality in Nature: The Next Generation 13-30 in October 2019 with Speakers Chris Packham, Bristol Deputy Mayor, Councillor Asher Craig, Green Party Councillor Cleo Lake, RSPB CEO Beccy Speight and Survival International CEO Stephen Corry.
She has also set up Black2Nature in 2016 with the aim of working with organisations to increase the access to nature of VME people and is President. Please connect with her on LinkedIn (Mya-Rose Birdgirl Craig) so that she can invite you to join the Race Equality in Nature LinkedIn Group and be part of the change.

Articles, interviews, and books
She has written articles for and appeared in many newspapers including BBC News Online, The Times, The Guardian, The Sunday Observer, The Sunday Telegraph, The Independent, Daily Mail, The Metro, New Statesman, Big Issue, New Internationalist, Resurgence & Ecologist Magazine, Friends of the Earth Magazine and Triodos Bank Magazine. She has been published in The Willowherb Review, New Networks for Nature, Chartered Institute of Ecology and Environmental Management and Red Sixty Seven. She is writing a children’s book and an autobiography about growing up with a passion for birds and her journey to seeing half the world’s birds.

Talks
She has given over 50 talks including her first hour and a half entertaining look at growing up birding, Born to Bird, in 2014, speaking at Tedx in 2016, being on a Panel with George Monbiot & Caroline Lucas MP in 2017, appearing at the Hay Festival 2018 Main Stage, speaking to 500 pupils at Millfield School, speaking at Chris Packham’s 2018 Peoples Walk for Wildlife in front of 10,000 people in Hyde Park and at English Nature’s 2019 Staff Conference to 1,500 conservationists.

Television and Radio
She has appeared on TV and Radio including BBC Springwatch, BBC Countryfile, BBC The One Show, Inside Out, BBC Radio Four Tweet of the Day, ITV West Film Feature plus a second and third, BBC Radio Four Saturday Live as well News such as Channel Four News, ITV News, Channel 5 News, The Today Programme appearing in BBC Four Twitchers: A Very British Obsession> age 7 and featured in the 2017 BFI/BBC Four Silent Roars, presenting a German-French Arte/ARD documentary Missing – Where have all the birds gone? investigating the decline of grassland and farmland bird species, a 2020 short film by Josh Dury and short videos for EarthWatch Institute Wild Days Programme.

Ambassadorships
Mya-Rose also campaigns to stop biodiversity loss and species extinction and the rights of indigenous peoples. She is involved with Youth for our Planet UK, is a Voluntary Sector Leader Representative on Bristol City Council Strategic Boards, on the Catalyse Change Advisory Board and has attended many meetings at Downing Street and Parliament. She is a Patron for The Bristol Global Goals Centre, Global Ambassador for Burns Price Foundation, Earthwatch Europe, Survival International, World Shorebird Day and Leica Optics as well as being a Charter Champion for The Charter for Trees, Woods and People.

Mya-Rose above all has a passion and love for birds and wildlife driving her in everything. Her favourite birds are Harpy Eagle seen in Brazil and Southern Cassowary in Queensland, Australia. Other animal favourites are Orangutang in Borneo, Mountain Gorillas in Uganda, Emperor Penguin in Antarctica and Komodo Dragon in Indonesia.