Due to my GCSE exams, I had an especially long summer holiday this year and my family and I decided to take full advantage of this by going to Tanzania for three weeks, Madagascar for 4 weeks, and with a three week school trip to Kenya wedged between them.

We had booked our 22 day birding trip with Tanzania Birding and Beyond (www.tanzaniabirding.com/about-us.html). Tina in the office was very responsive and sorted queries out very quickly. It is a Tanzanian owned company which is also great. Our guide was Anthony Raphael who was excellent at digging out the target species for us, staying focussed and not giving up. Our driver Gaiten was also brilliant, having some very long journeys to do. Anthony is at the Bird Fair 2018, so go and talk to him.

On Sunday 8 July, we left Arusha to head east.

However, first we stopped at an upmarket part of town with big houses, embassies and old trees, where we found our target, Brown-breasted Barbet.

Then we had a two  hour drive to the North Pare Mountains, but first stopping by a river at Kifaru, where we saw Taveta Weaver, African Reed Warbler, several Malachite Kingfisher and finally saw Bare-eyed Thrush, after so many attempts.

After more driving, we stopped at Nyumba Ya Mungu. Here we saw Somali Bunting (I love anything with Somali in the name!), Baglafecht Weaver and Red-faced Crombec.

That night we stayed at Elephant Motel in Kakatu where we were staying for two nights whilst we birded that area.

This morning, Monday 9th July we went for a pre breakfast birding jaunt to the South Pare Mountains (part of the Eastern Arc Mountain range), where we saw our target species of Scaly Chatterer, another Bare-eyed Thrush, Tsavo Sunbird, Grey-headed Silverbill and Southern Grosbeak-starling.


We carried on, to bird at Shengena Peak, also in the Southern Pare Mountains. Here we had a brilliant few hours birding seeing Black-headed Apalis (white bodied form), Montane White-eye (surely this is going to be a split to South Pare White-eye?), Usambara Double-collared Sunbird, Southern Grosbeak-canary, White-headed Mousebird and Green-winged Pytilla.

In the morning we birded in Mkomazi, still in the South Pare Mountains, where we saw our target Eastern Black-headed Batis.


Then we drove east, stopping at one road-side site en-route where we saw Coastal Cisticola. The area after this is good for Striped Pipit, so although we looked from the road, we didn’t see one.

We reached Muller’s Lodge in Lushoto for lunch, which is also in the West Usambara, which is within Eastern Arc Mountain range

Tanzania used to be a German colony until after the Second World War when Britain took over.  Lushoto was chosen as the German administrative centre and our hotel was where the Governor lived. They chose this area as their headquarters to live because it was cool in the mountains and fewer mosquitos.

We spent the afternoon birding in the Mkuzi Forest, surrounding forests within West Usambara. It was a shame that in the background all we could hear was the constant sound of chainsaws, even though it is meant to be protected as National Park.  We saw some great birds, including a larger race of Fork-tailed Drongo (ripe for a split?), Red-capped Forest Warbler, Cinnamon-chested Bee-eater and White-chested Alethe. 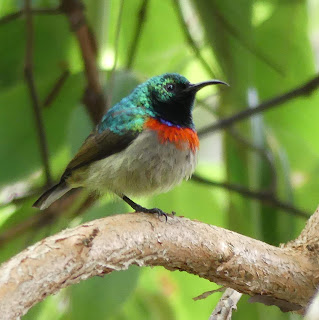 Back at the lodge, pre dinner, we saw an African Wood Owl that Anthony had called in then came to get us from our room. Apparently, they got African Spotted Eagle Owl and Usambara Nightjar on the grounds, but we unfortunately didn’t see them.

Today, Wednesday 11th July we spent the whole day birding in Magambe Forest, in the West Usambara. The section of forest we visited has been preserved better than the area where we birded yesterday which was closer to villages.

I saw all our targets which were Mountain, Shelley’s, Stripe-faced and Placid Greenbuls, Usambara Thrush, Weaver and Akalat and a Spot-throat. The last four birds are incredibly skulky and so we had to go to a quiet area, where we walked deep into the forest. It’s the sort of birding that I’m in my element in, lots of sitting still and picking out the slightest movement with my young eyes, which makes a lot of difference. The Usambara Akalat was a bird that only I saw. I called it and pointed out where it had disappeared just as it called again from where I was pointing, just to prove me right. So we would be returning to the forest tomorrow to try and get Mum and Dad onto it. Unsurprisingly, no photos of the sulky birds!

It was rapidly getting dark as we tried to find our way out of the forest when Anthony called Usambara Nightjar, then which flew over several times.

Back at the hotel after dinner, we settled down to watching England V Croatia on TV,  with a coal fire bowl nest to us to keep us warm. We then went through all the emotions of the match, with everyone back home, from a goal up to a lose…

Mya-Rose was a Bristol European Green Capital Ambassador along with Kevin McCloud, Hugh Fearnley-Whittingstall, Tony Juniper, Simon King, Miranda Krestovnikoff and Shaun the Sheep! See the full list of Bristol Ambassadors. She has also been listed with the singer-songwriter George Ezra and actress Maisie Williams from Game of Thrones as one of Bristol's most influential young people. She is an Ambassador for World Shorebirds Day, See It Her Way and a Charter Champion for The Charter for Woods, Trees and People. She has given over 50 talks, speaking at conferences such as being on a panel with George Monbiot and Caroline Lucas on Sustainability and the Future of Cities. She has also appeared on TV an dis particularly proud of being in Silent Roars, a short film which was part of Listen to Britain 2017 https://player.bfi.org.uk/free/film/watch-the-silent-roars-2017-online. She organised a conference, Race Equality in Nature, in June 2016 aiming to increase the ethnic diversity in nature and plans to run her fifth Camp Avalon camp in 2018. She has also set up Black2Nature with the aim of working with organisations to increase the access to nature of Black Asian Minority Ethnic people. Please connect with her on LinkedIn (Mya-Rose Birdgirl Craig) so that she can invite you to join the Race Equality in Nature LinkedIn Group and be part of the change. She has been awarded the Bath and West Show Environmental Youth Award 2017 for Bristol for her Black2Nature work EYA 2017. Please also like her Birdgirl Facebook Page and follow her on Birdgirl Twitter.