Day 22 - Walking in Compton Woods after school and smelling the wild garlic and flowers. I am really lucky to have such beautiful woods just at the top of my lane.

Day 23 - Watching a Pond Skater on my garden wildlife pond


Today after school as I walked home, I stopped and had a look on my pond to see what I could see. As well as damselfly mating, there were a load of Pond Skater on the pond with one or two close enough for me to take a photo with my I-phone.

Day 24 - Today after school, on my way home, I stopped off and went into the field opposite out house. This is the same field that I went into earlier in the month, enjoyed the scenery in a wildflower meadow and danced in an isolated spot.

However, since then the grass and flowers had been cut short and taken away by a farmer.  I went into the field to see what had changed with the grass cut.

I walked to the top of the field and enjoyed watching the long grassy wildflower set aside alive with bees, butterflies and insects.  It was beautiful to see and feel. 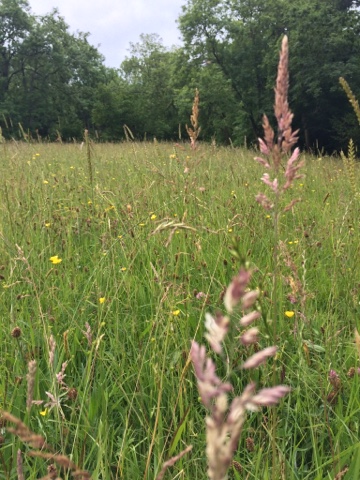 Set aside in the field opposite our house, Compton Martin, Bristol
Photograph taken by Young Birder Birdgirl Mya-Rose Craig

Imagine what Compton Martin would look like if rewilding was applied here and the fields were not cut at all and cows and sheep were not brought into the village, impacting on rights of way and our surroundings.  Imagine natural wildflower meadows the whole summer.  I wonder how much our village farmer earns for hay and grazing in any year? Would he let it rewild if we paid him to leave it as wildflower meadows?  Or would he be too worried that rewilding his fields would mean that they could never be built on?

Our fields go from the road to the woods, wouldn't it be amazing if this corridor was as nature intended it?  Tell me what you think by leaving a comment.

Day 25 - Today I went for a walk up our lane and recorded a Chiffchaff singing loudly.  It is truly lovely to hear

We used to have some decent recording gear, but it got stolen on the way home from Australia.  I would have liked to have recorded a dawn chorus but mid week is a bit optimistic for that!

Day 26 - Today I took my Scout group to the Mendips to look for Nightjar.  It was amazing to watch the group so excited at just hearing a bird churring.

Most of my Scout group don't know anything about birds and so I think it is really important to try and get them interested.

Day 27 - Going to the Festival of Nature in Bath

There were a lot less stands than at the Bristol Festival but it was lovely to catch up with people.  I had a long chat with Matt Collis from the Avon Wildlife Trust about Camp Avalon.

We found out about Bee Lines (Bee Corridors) as Dad is now on the Parish Council in Compton Martin and wanted to do what he could to help create Bee Corridors through our parish.

It was lovely to speak to the Greenpeace and Badger Group people again, they are my friends now and I always feel inspired when I talk to them.

I also found out about Splatter Spotter based at Cardiff University, who want everyone to let them know about any roadkill they see.   If you see anything, let them know about it @projectsplatter or www.projectsplatter.co.uk but if you see an otter or bird of prey, then they need the body to do an autopsy. They said I could watch an otter autopsy which would be sad but cool.

I also learnt more about things not to put down the toilet/sink and was given a gunk pot to collect cooking oil into, cool it down and then make a fat ball for the birds.

Today we had planned a twitch.  There had been a Hudsonian Whimbrel 2-3 hours away in Pagham Harbour on the South Coast.  I hadn't been able to go as I'd been at Camp Avalon last weekend and at the Festival of Nature in Bristol the weekend before, trying publicise the camp.

We had been at the Festival of Nature Bath yesterday talking to people about conservation issues before I had a tap dance exam rehearsal, which I couldn't miss.

When we arrived, there were no other birders there, so we set aside trying to find the bird.  The first whimbrel we saw had a strong head pattern.  We were sure it was the right bird but weren't sure for another 1/2 hour when it flew and we could see that it didn't have a white rump like our Eurasian Whimbrel buy a Brown one like this bird that comes from North America.


It was a special bird for me.  The Sunday before I was born, on turned up in Newport, less than a hour from our house. By some miracle, Mum agreed to stay behind and Dad twitched it with my big sister Ayesha who was twelve at the time.  Then, two years later the same bird turned up there again and this time Mum and Dad twitched it with me as a toddler.  It's good to see this bird that I have already seen but was "too young to tick".

This bird takes my British list to 449.  I am now on the same as Ayesha, who has been stuck on 449 since she had her second baby.  Maybe I still have a chance at Lady Amhurst's Pheasant or Cory's Shearwater before we head off birding to East Africa (Uganda, Rwanda and Kenya) on the 18th July 2015 and might sneak ahead of her and finally hit 450.

Mya-Rose Craig is a 13 year old young birder, conservationist, writer and speaker. She is based near Bristol and writes the successful Birdgirl Blog, with posts about birding and conservation from around the world. She is looking forward to going Mountain Gorilla Trekking in East Africa in the summer and watching Penguins in Antarctica in December 2015, which will be her 7th continent. She has recently been listed with the singer songwriter George Ezra and actress Maisie Williams from Game of Thrones as one of Bristol's most influential young people. Please like her Birdgirl Facebook Page and follow her on Birdgirl Twitter