Where the River Runs Gold by Sita Brahmachari 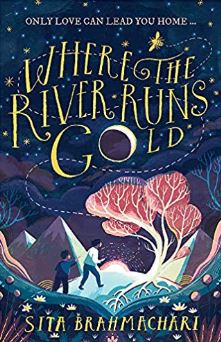 This is a wonderful inter-generational book about a pair of 11 year olds set in the future where children have to work on farms as we have lost our bees.  This book is suitable for all generations will characters across age ranges. I love the fact that the siblings have a father called Nabil, which is my cousin’s name.

Thank you Sita Brahmachari for mentioning me in her acknowledgements for the book. I am so proud.

Two children must risk everything to escape their fate and find the impossible . . . A brave, thought-provoking adventure by award-winning author, Sita Brahmachari.

Shifa and her brother, Themba, live in Kairos City with their father, Nabil. The few live in luxury, whilst the millions like them crowd together in compounds, surviving on meagre rations and governed by Freedom Fields - the organisation that looks after you, as long as you opt in.

The bees have long disappeared; instead children must labour on farms, pollinating crops so that the nation can eat. But Nabil remembers Before and he knows that the soul needs to be nourished as much as the body so, despite the risk, he teaches his children how to grow flowers on a secret piece of land hidden beneath the train tracks.

The farm Shifa and Themba are sent to is hard and cruel. Themba won't survive there and Shifa comes up with a plan to break them out. But they have no idea where they are - their only guide is a map drawn from the ramblings of a stranger.
The journey ahead is fraught with danger, but Shifa is strong and knows to listen to her instincts - to let hope guide them home. The freedom of a nation depends on it . . .


Mya-Rose Craig is a 16-year-old young British Bangladeshi birder, naturalist, conservationist, environmentalist, activist, writer and speaker. She is based near Bristol and writes posts about birding, conservation and environmental issues from around the world.