On the 8th May 2017, I went right from school to speak at Bath Spa University at their College of Liberal Arts, at the end of their Nature and Wellbeing Conference. I talked about Camp Avalon, my Race Equality in Nature Conference and about Black2Nature.

There were plenty of questions and interest in what I was talking about and I really felt that my talk triggered a real "lightbulb moment" amongst the people listening. There was also time to talk afterwards, which was also really interesting. It was fascinating to talk to Philippa Forsey from Creativity Works in Radstock near Bath, close to where we live. She had met Mum loads of times in her work to do with mental health and had heard Mum mention me (as well as one of her colleagues who had done a serious of creative writing sessions with me and my class at primary school) but thought she was just a proud mum and came over to say how amazing she thought I was and it was lovely that she knew mum too.

Stephen Moss was a lecturer within this department, but was away in Peru, it was a shame not to meet him again. The event really inspired me to get writing even more, so you never know, you might see a book from me one day!

Thanks to Dr Samantha Walton for organising the event and inviting me to speak. 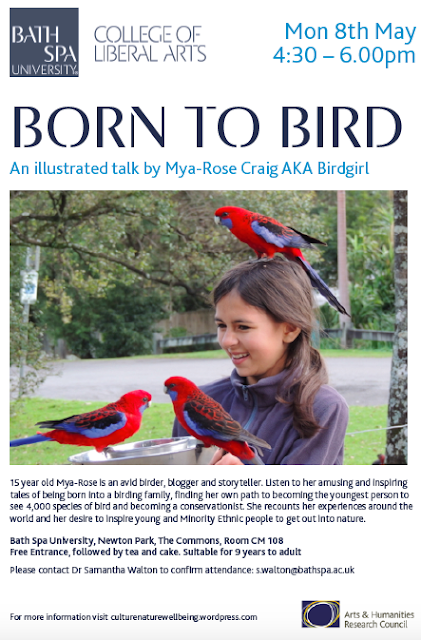 Mya-Rose Craig is a 15-year-old young British Bangladeshi birder, naturalist, conservationist, environmentalist, activist, writer and speaker. She is based near Bristol and writes the successful Birdgirl Blog, with posts about birding and conservation from around the world. She loved seeing Mountain Gorillas in East Africa and Penguins in Antarctica over Christmas 2015, her 7th continent.