Appearing in The Resurgence and Ecologist Magazine


Today I appeared in The Resurgence and Ecologist Magazine

When I heard that the GMO campaign by Beyond GM that I had been involved in called "Our Food our Future" with my video on GMO's had appeared in The Resurgence and Ecologist, I knew it was significant but was not sure exactly why. As a British activist, I had heard of The Ecologist, but I didn't know why it was prominent. So I looked it up. This is what I found on Wikipedia.

"The Ecologist is the title of a British environmental journal, then magazine, that was published from 1970 to 2009. Founded by Edward Goldsmith, it addressed a wide range of environmental subjects and promoted an ecological systems thinking approach through its news stories, investigations and opinion articles. The Ecologist encouraged its readers to tackle global issues on a local scale. After cessation of its print edition in July 2009, The Ecologist continued as an online magazine. In mid-2012, it merged with Resurgence magazine, edited by Satish Kumar, with the first issue of the new Resurgence & Ecologist appearing in print in September 2012. The Ecologist was based in London."

"In 1972, the Ecologist published A Blueprint for Survival (1972), to which an entire issue was dedicated. Writing in the Guardian newspaper, former contributor Fred Pearce described it as "a radical green manifesto that went on to sell 750,000 copies and kept the magazine financially afloat for years."[citation needed] A recommendation of the Blueprint led directly to the creation of the People Party which became the Ecology Party and then the Green Party (UK). A Blueprint for Survival follows through the consequences of what happens when humans disrupt the ecosystems in which they exist. It explains that when these systems are disrupted, they alter other ecosystems all over the world. Written in an age before climate change was understood, A Blueprint for Survival stands as one of the earliest forecasts of many of the environmental problems the world faces today."

"In the 'Monsanto' issue of September 1998, The Ecologist assembled a selection of articles critical of agri-business giant, Monsanto’s, environmental record. The Ecologist's printing firm at the time, Penwells, feared libel litigation from Monsanto and pulped the 14,000 copies of the edition. The issue was ultimately printed by a small London printer and went on to become the most-sold issue of The Ecologist ever."

"Amongst it's editors was Zac Goldsmith, Edward's Nephew. He stepped down as editor in June 2007, saying, "The magazine has to remain impartial and feel free to have a go at the Government and at the Conservatives. So I can't both be the editor and a parliamentary candidate." He remained as Chairman and Director of The Ecologist." 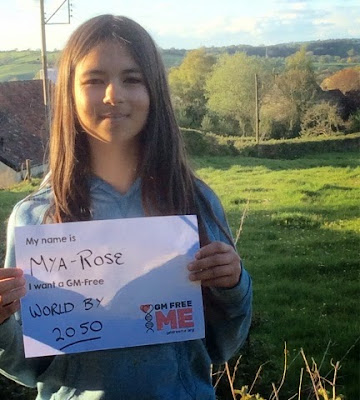 It's important to understand the work of others before and clearly The Resurgence and Ecologist has done a huge amount to highlight issues to do with the environment.

It's a shame that the Goldsmiths are so right wing in their politics as it would have been great to have someone standing as London Mayor from the Green Party.  I actually think there is a conflict between conservative politics and environmental principles, at least at the moment.

So now I understand the importance of appearing in an iconic environmental Magazine and feel very proud of myself.  Well done to Pat Thomas at Beyond GM for getting her article published there.