Saturday morning was the first full day if the camp.  Mum started waking us all up at 6.30 pm but needless to say we didn't jump up.  Mum got up, sorted cereal and hot water for tea and coffee.  By 7 am we were all up, silently sitting eating our breakfast.  We were meant to be meeting Somerset birders Julian Thomas and Chris Griffin at Ham Wall Car Park at 7.30 am but ended up being 20 minutes late.  Fortunately, they seemed to understand.

We had a great walk seeing some local specialties like Great White Egret in perfect weather.  All the young birders were immediately engaged and loving it.  I wasn't sure what would happen with the others, but sure enough Chris had them mesmerised when he starting talking about Peregrines flying downwards at a faster speed than a F1 car.

Mum took two Bristol boys who were keen to see the Bio Blitz's mammal traps opened and who were incredibly disappointed when nothing was caught.  It was the fact that they were interested that mattered. 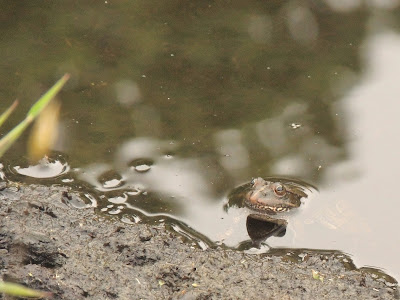 Mya-Rose Craig is a 13 year old young birder, conservationist, writer and speaker. She is based near Bristol and writes the successful Birdgirl Blog, with posts about birding and conservation from around the world. She is looking forward to going Mountain Gorilla Trekking in East Africa in the summer and watching Penguins in Antarctica in December 2015, which will be her 7th continent. She has recently been listed with the singer songwriter George Ezra and actress Maisie Williams from Game of Thrones as one of Bristol's most influential young people. Please like her Birdgirl Facebook Page and follow her on Birdgirl Twitter